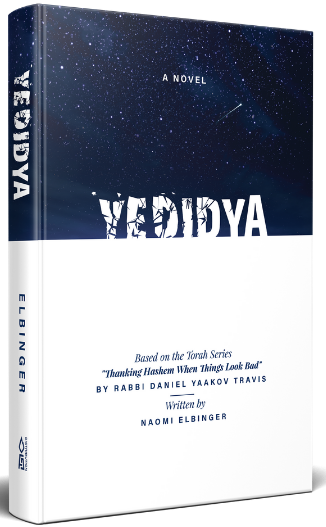 Nachum welcomed Rabbi Daniel Yaakov Travis to this morning’s JM in the AM to explore the novel “Yedidya,” written by Naomi Elbinger and based on Rabbi Travis’s shiruim.

YEDIDYA: A NOVEL
Based on the shiurim of Rabbi Daniel Yaakov Travis | Written by Naomi Elbinger

I haven’t read a novel in years, but this one is different. Yedidya is both a gripping story and a profound, uplifting exploration of what it means to be a faithful Jew in the modern world. – Rabbi Yitzchok Jaeger: Author, the Guidelines halachah series

Meet Yedidya Steinhart: a typical yeshiva bachur, or at least he would like to be. He’s left behind a tough childhood in New York and is determined to make it at an elite Jerusalem yeshiva.

But then two unexpected events turn his world upside down: first, he is visited by an apparent nevuah ketanah, a “small prophecy” as described in the Talmud; second, he is falsely accused of a serious crime, with shattering consequences.

Yedidya’s quest to rebuild his life brings unlikely friends, mentors, and adventures, as well as illuminating discoveries about happiness and faith through the ups and downs of real life.