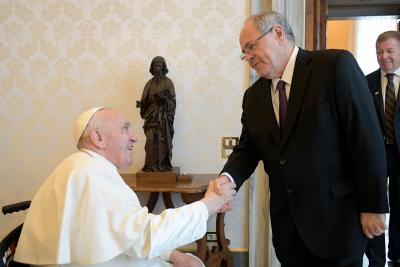 From the Yad Vashem website:
Today, Yad Vashem Chairman Dani Dayan met for a rare private audience with His Holiness Pope Francis in the Vatican. At the meeting, the two discussed the importance of Holocaust research and remembrance in the Christian world. This meeting marks the first-ever such encounter: While the past three Popes have visited Yad Vashem on Jerusalem’s Mount of Remembrance, the context of these visits reflected the status of the relationship between the Catholic Church and the Jewish People. This private audience with Pope Francis, who last visited Yad Vashem in 2014, had a different focus – to bolster collaborative activities between Yad Vashem and the Vatican in areas of Holocaust remembrance, education and documentation, and to discuss efforts to fight antisemitism and racism worldwide. To that end, Israeli Ambassador to the Vatican H.E. Mr. Raphael Schutz was also in attendance. Additionally, Pope Francis and Dayan found an instant connection due to their mutual native tongue and their Argentinian roots.

“During this historic meeting today with His Holiness Pope Francis I felt the weight of responsibility as someone who represents not only himself and not only the present, but rather the entire Jewish people throughout its history. This is why I proposed to the Pope all of Yad Vashem’s expertise and influence, our abilities, materials and scholarship in order to address these issues related to the Holocaust and the Church in particular, and on the worldwide stage in general.”

Dani Dayan expressed his gratitude to the Pope for his decision to open the WWII-era Vatican Archives, and to address questions regarding the Church during the Holocaust. Yad Vashem archivists are currently gathering information from these collections, with the goal of bringing them to the Mount of Remembrance in Jerusalem where they can be studied and hopefully shed light on the experiences and fate of many Holocaust victims.

“The Pope expressed great emotion when discussing the Holocaust. He said that the opening of the Vatican Archives related to World War II is an issue of justice, and that the Church is not afraid of history. In addition to this, the Pope said that like in every group, there were those individuals in the Church who acted correctly and those who did not. This was an important statement from His Holiness Pope Francis.”

Following the discussion, Dayan presented Pope Francis with a gift on behalf of Yad Vashem; a replica of a colorful synagogue painting depicting the Tablets of the Covenant (The Ten Commandments) given to the Children of Israel on Mount Sinai. The original painting, created by I. Eisikowicz, was an adornment on a twentieth-century Torah ark in Cernăuți, Romania (now Chernivtsi, Ukraine), and is all that remains from this once-thriving center of Jewish life before it was destroyed by the Nazis during the Holocaust. The drawing depicts the scene of the Revelation at Sinai according to scripture; the Tablets of the Covenant rest on the lush green Mount Sinai against a background of a starlit sky. The Ten Commandments are written on the tablets at the base of flames of fire, topped by a crown adorned with a Star of David. The Tablets of the Covenant represent the eternal Judeo-Christian values, and the plaque model is therefore a poignant gift from a representative of the Jewish people to the Pope.

The plaque was kept in dilapidated and abandoned synagogues in Romania until it was acquired by Yad Vashem during an operation initiated in the 1990s to collect and rescue religious objects and relics remaining in Romania after the war. This artifact is one of dozens of religious artifacts on display in the Yad Vashem Synagogue.

On behalf of the President of Israel H.E. Mr. Isaac Herzog, at the conclusion of the meeting, Yad Vashem Chairman Dani Dayan extended an invitation to the Pope to once again visit the State of Israel and Yad Vashem. Likewise, the Pope reassured Dayan that Yad Vashem would always find a friend in the Vatican. As an expression of this friendship, Pope Francis presented Dayan with a symbolic gift: a bronze statue of an olive branch, as a sign of peace and hope.