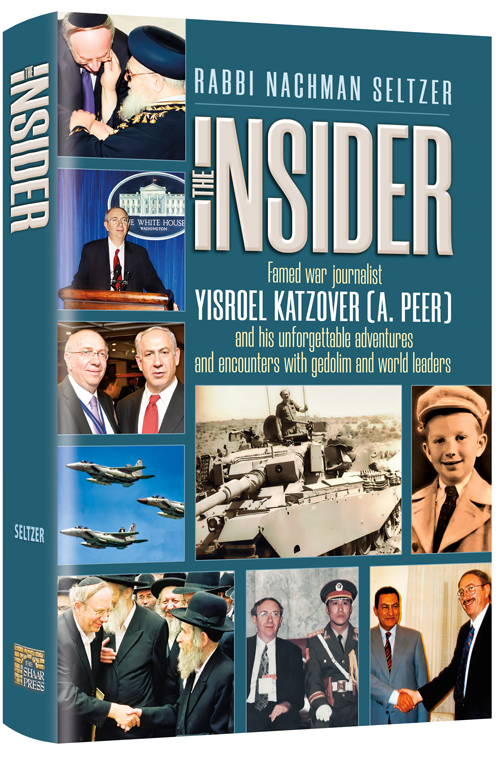 Nachum was joined by Rabbi Nachman Seltzer to discuss his latest ArtScroll publication, “The Insider: Famed war journalist Yisroel Katzover (A. Peer) and his unforgettable adventures and encounters with gedolim and world leaders”.

Always remember to use promo code radio at ArtScroll.com to get great savings and free shipping!

Gedolim and world leaders. Politicians, spies and soldiers.
Inspiration and mystery, bullets and bitachon.
This book has it all.

• How did a young journalist create a revolution in the Israeli government — by defending the honor of Shabbos?

• What did the Pnei Menachem say about Yitzchak Rabin — and how did his words eerily come true?

• What is the inside story of the Iranian nuclear program — and how is Israel managing to defend itself?

• Could a Polish non-Jew possibly be Reb Yisroel’s brother, who’d disappeared during the terrible Holocaust years?

For more than 50 years Reb Yisroel Katzover — also writing for Hamodia under the name A. Pe’er — has been one of Israel’s premier military journalists. As an observant Jew, he has often served as an unofficial liaison between the country’s military and political leadership and the nation’s gedolei Torah. As a pioneer in the world of Jewish music, he’s encouraged the careers of some of today’s most preeminent musicians.

In this unforgettable memoir, we learn the inside story about the personalities that he’s met, the travels he’s taken, and the lessons he’s learned from a half century of journalistic adventures. As the “ultimate insider,” we hear stories that we’ve never heard before, that we never dreamed could be true.

No one tells a story quite like Rabbi Nachman Seltzer, author of almost 40 books including the bestsellers Incredible! and Living Legend. Combine his unique storytelling talents with a man who has countless fascinating stories — and you get a book that’s part thriller, part secret history, part inspiration — and 100% excitement!