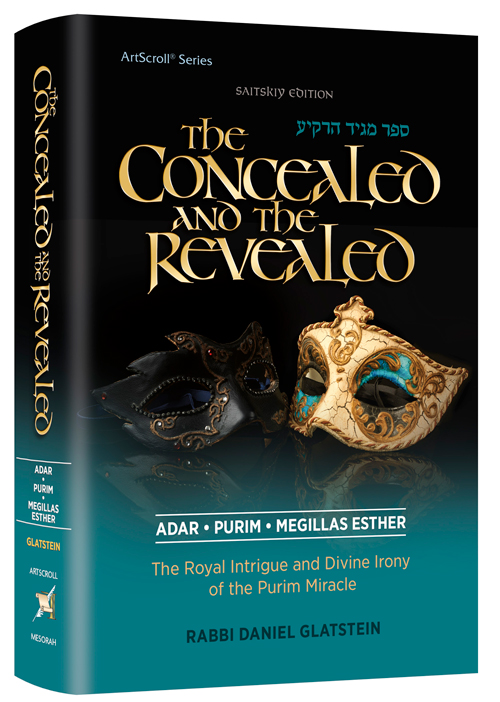 Nachum welcomed Rabbi Daniel Glatstein, author of the new ArtScroll release “The Concealed and the Revealed: The Royal Intrigue and Divine Irony of the Purim Miracle,” to this morning’s JM in the AM to explore the book and discuss the upcoming holiday of Purim.

From the ArtScroll site:

Today, we experience a very different kind of concealment. Beneath the joy and merriment of our Purim celebrations lie many virtually unknown – and soul stirring- Torah truths that most of us have never encountered. Truths known to our Sages and Torah commentators, and now revealed to us through the scholarship and brilliance of Rabbi Daniel Glatstein.

Rav and founder of Machon Maggid Harakiah in Cedarhurst, NY, Rabbi Glatstein is one of the contemporary Jewish world’s most popular speakers and respected maggidei shiur. His more than 7000 recorded shiurim have garnered millions of views on Torahanytime.com and other venues. His Hebrew sefarim as well have garnered acclaim throughout the Torah world. Rabbi Glatstein has a masterful grasp of an exceptional array of sefarim and commentaries, and a rare ability to explain profound teachings with remarkable clarity.

In The Concealed and The Revealed, we will discover how seminal events throughout history are predicted in the Megillah and the astounding significance of the unusual letter formations. How all of Haman’s plans boomeranged right back at him and how Achashveirosh actually helped finance the rebuilding of the second Beis Hamikdash. We will learn about Eliyahu HaNavi’s mysterious appearances in the Megillah and why only an orphan like Queen Esther was chosen for her role to bring salvation to the Jewish People. So much wisdom, so many breathtaking chiddushim: The Concealed and The Revealed is like a generous and beautiful mishloach manos basket to Klal Yisrael, filled with delicacies that will nourish our souls and immeasurably enrich our joy on Purim and throughout our lives.