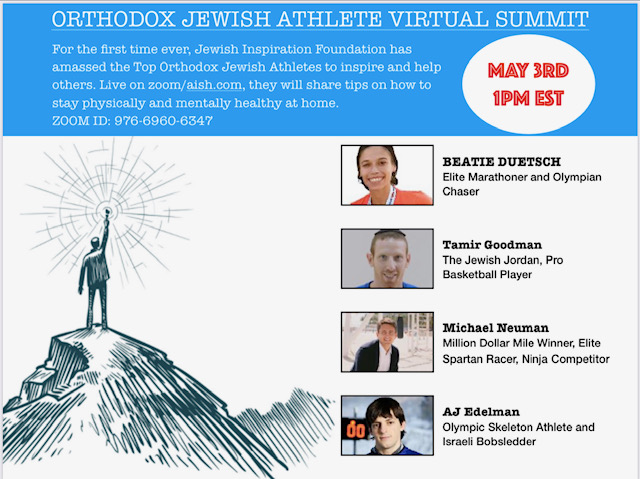 Nachum welcomed Michael Neuman to this morning’s JM in the AM to preview the May 3rd “Orthodox Jewish Athletes Live on Zoom! Keeping you in shape during quarantine.” The press release is below: For the first time ever, Jewish Inspiration Foundation has amassed the Top Orthodox Jewish Athletes to inspire and help others. These Orthodox Jewish Athletes defied odds and obstacles and now want to do their part during these challenging times. This event will be presented live on zoom/aish.com as they share their favorite tips on how to stay in the best physical and mental shape while sheltering at home. Sunday, May 3rd at 1:00 p.m. EST Zoom ID: 976-6960-6347, https://zoom.us/j/97669606347 In this unique event, you will hear about the stigmas they have faced, the obstacles they’ve overcome and their most meaningful personal stories. You will be able to ask questions live and learn how to stay fit during this time in quarantine. “Orthodox Jews have come a long way in sports. We now have the opportunities to chase our dreams, fight stigmas and compete in major athletic events.” Michael Neman Athletes on the Panel: Tamir Goodman, dubbed by Sports Illustrated as “The Jewish Jordan” in 1999, was ranked 25th High School Basketball player in the country. Tamir became the first Orthodox Jew to play D-1 college and professional Basketball. Beatie Duetsch, pegged the Marathon Mother, is an Orthodox Jewish Mom living in Israel who competes in marathons. She was in the top 80 women world wide for the Olympics and was on her way to an Olympic appearance before it was moved to Saturday (Sabbath). She has won many marathons, breaking stigmas for orthodox Jewish women athletes. Michael Neuman became the first orthodox Jewish elite racer and podium winner in Spartan racing history. Michael’s 25k win over a pro athlete on CBS’s show Million Dollar Mile produced by Lebron James, went viral. He is confirmed to compete on another TV athletic competition show in the coming year. AJ Edelman is an orthodox Jew who represented Israel in the Olympics in the Skeleton competition. Edelman is also a part of the Israeli Bobsled Team. For interview requests or questions, email info@jifoundation.org or call 305-401-5498