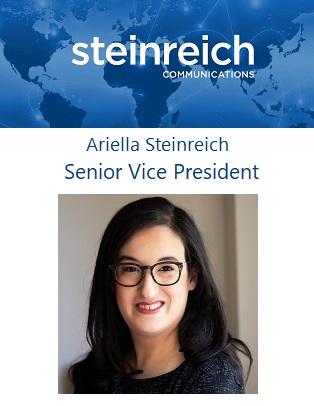 Nachum welcomed Ariella Steinreich, Senior Vice President of Steinreich Communications, to this morning’s JM in the AM to discuss the first communal matzah baking for the Jewish communities in the Gulf countries.

Read the press release below:

DUBAI – The Association of Gulf Jewish Communities (AGJC), the people-to-people network of Jewish communities from the Gulf Cooperation Council (GCC) countries that are developing Jewish life in the region, will provide another religious first for the region by bringing matzah baking to several GCC countries in the lead up to Passover, which begins Friday, April 15.

Additionally, the group has arranged for the shipment of 775 pounds of matzah to be distributed throughout the GCC, a nearly 20-percent increase as compared to last Passover.

“As Jewish life in the Gulf continues its historic rise, there is a greater need for matzah than in years past,” said the AGJC’s Rabbi Dr. Elie Abadie. “Our objective in creating the AGJC was to share resources among the communities in the region and by bringing in matzah, and localized baking in some countries, more Jews will be able to have the convenience of celebrating Passover here this year.”

“We are very excited to be baking matzah with our communities this year, it is something that some used to do individually in the past, but this year we will be able to bring families and children to participate in this mitzvah,” said AGJC President Ebrahim Nonoo. “We have seen an influx of Jewish people moving to the GCC over the last year and are expecting several Passover programs in our countries this year as well. We are thrilled to have an increased demand for matzah and to be able to ship in more matzah this year than ever before.”

The Association of Gulf Jewish Communities (AGJC) is the umbrella organization for the Jewish communities of the Gulf Cooperation Council (GCC) countries that are building and enhancing Jewish life in the region. While each community is independent, they share a common goal and vision – for Jewish life to flourish in the Gulf for the benefit of both residents and visitors. The AGJC oversees programming and services such as the Beth Din of Arabia, the Arabian Kosher Certification Agency, lifecycle events and other community programs. For more information, visit www.gulfjewish.org.