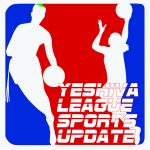 As winter break rolls on, a handful of games are on the slate that will kick off the final weeks of the Winter sports regular season. Straight ahead on the Tuesday Morning JM in the AM Sports Update, we set the stage for the stretch run in basketball and hockey. All that and more, good morning, I’m Elliot Weiselberg.

We’ll start off with the largest slate of the last 2 weeks, Varsity Basketball. North Shore took another step toward the East crown, taking a 40-30 win off Waterbury to improve to 11-0 on the season. The Lions hold a two game lead on Magen David with three games to play. Waterbury would rebound with a win over Magen Abraham to even their record at 6-6 and put them on the brink of a playoff berth. A Waterbury win or YDE loss will give the Wolfpack the 6th and final East spot. Out West, MTA downed Kushner 46-33 behind 17 points from Gavriel Rudman. The West also has one spot left up for grabs, but can be taken care of with a JEC win or Ohr Yisroel loss. The two will face on February 7th.

Moving over to JV where one game was played, but one with a major effect on the West playoff outlook. Ramaz knocked SAR from the ranks of the undefeated, downing the Sting 56-50. The result leaves TABC as the only undefeated team out West at 8-0 with SAR at 7-1 and Ramaz at 7-2. For SAR, they now find themselves in limbo as to the first-round, as they play TABC on Thursday night. A win can give SAR the division title, however, a loss would put them in a potential tie with the Rams, meaning that SAR could slip from a bye all the way down to having to play a first-round game in only a two-week stretch.

In Girls Varsity, Ramaz and SAR both picked up wins. Both teams are set for the postseason, as the West teams are wrapped up with Frisch and Maayanot joining them. Out East, one spot remains, but can be wrapped up with a HANC win over North Shore next Tuesday.

In Varsity hockey, SAR avenged their earlier loss to Ramaz, blanking the Rams 7-0, officially eliminating Ramaz from playoff contention and keeping a first-round home game in clear focus in Riverdale. The Sting will face Frisch Thursday night as both battle for position in the upcoming postseason. Kushner and TABC will both do the same tomorrow night as Kushner looks to improve their standing and keep their playoff hopes alive as they battle with MTA and Flatbush for the final playoff berths.

JV Hockey begins an important stretch this week as well, as Frisch faces TABC on Thursday. A TABC win would put the Storm in position to clinch the West with a win over SAR next week and would cripple Frisch’s playoff hopes as they battle with Flatbush and Ohr Yisroel for the last berth.

For a more in- depth look at the playoff races in JV and Varsity Hockey, keep tuned to Yeshiva League Pass for an interview with yours truly on Yeshiva League Face-Off hosted by Josh Kass, dropping this week. We dive into both leagues and tear down all possibilities with the remaining matchups on the other side of the break.