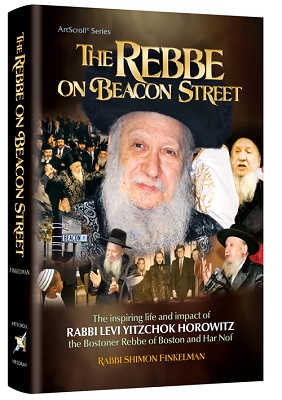 “Do you know where I can find a place to stay for Shabbos?”
“Sure. Go to the Grand Rabbi on Beacon Street. He always has room for one more.”

He came from a long line of chassidic leaders, reaching all the way back to the Baal Shem Tov. He was the son of the first Bostoner Rebbe, Rabbi Pinchos Dovid Horowitz. He was a brilliant Torah scholar, having learned at Mesivta Torah Vodaath under one of the greatest roshei yeshivah of that time. And yet in his profound modesty, Rav Levi Yitzchok Horowitz did not see himself as a rebbe.

Hashem, though, decreed otherwise. When a small group of his father’s followers pleaded with Rav Levi Yitzchok to come to Boston and lead their shul, he acquiesced. And in the next sixty years, he and his devoted rebbetzin would change the lives of thousands. As rav of his kehillah — which included influential professionals and intellectuals, a dynamic leader of the Boston Jewish community, and Shabbos host to scores of searching college students, the Bostoner Rebbe was a pivotal figure in the flourishing of Torah life in America in the decades after World War II.

In The Rebbe on Beacon Street you will read of the Rebbe’s wisdom and warmth, of his burning desire to help every Jew who came his way, both physically and spiritually. Like Avraham Avinu and Sarah Imeinu, the Rebbe and Rebbetzin on Beacon Street opened their homes to all: everyone was welcomed and treated like family.

Among the Rebbe’s greatest achievements was his founding of ROFEH International, an organization dedicated to providing medical referrals and support services to sick people and their families.

When already in his mid-60s — when many are beginning to contemplate retirement — the Rebbe founded a new community with the opening of a shul in Jerusalem’s Har Nof neighborhood. For the next two decades, he would spend six months a year leading and developing a Bostoner kehillah in Eretz Yisrael, while continuing to be a father figure to his flock in Boston.

Come and meet The Rebbe on Beacon Street. As you bask in the glow of his overflowing ahavas Yisrael, you will feel inspired. Enlightened. Transformed.