Nachum welcomed Rabbi Shalom Axelrod back to JM in the AM to discuss the RZA’s work through their Israel Community Fund. 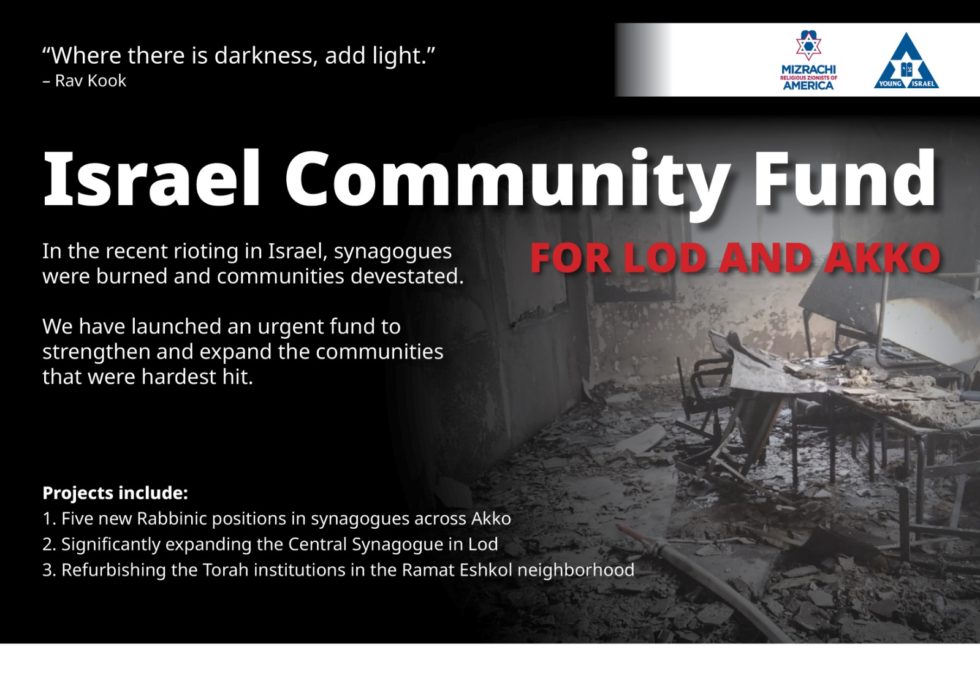 NEW YORK — Over the coming weeks, the Religious Zionists of America (RZA) Israel Community Fund’s (ICF) Lod and Akko Recovery Campaign is looking to more than double the funds previously raised. The move comes at a critical stage in the rebuilding of both communities which were most impacted by Arab rioting earlier this year. Thus far, in the few months since it launched, the campaign has already raised US$115,000.

The riots in Lod earlier this year, resulted in 100 Jewish homes being burned, more than 300 Jewish homes being looted, 800 cars belonging to Jewish owners destroyed and 10 synagogues being burned and sustaining damage. The period notably created emotional trauma in the lives of many of the community’s residents, some of whom fled to family members in cities where the tensions were calmer. The fund’s stated goal is to help community members return to their homes and lives, and to help create a stronger and more cohesive community for those looking to settle there.

This summer’s RZA-Mizrachi Leadership Solidarity Mission, a delegation of 25 American Jewish communal leaders, toured the damage in Lod firsthand. In speaking with community members and leaders in Lod, the group launched the Israel Community Fund, and established a targeted fundraising goal necessary to rebuild Lod and Akko. The funds raised have already enabled emotional and trauma counseling resources to be deployed in the two cities, and kickstarted the rebuilding and refurbishing process of Lod’s central synagogue as well as Ramat Eshkol’s Torah institutions. It also helped to sponsor communal shabbat meals and programs for the affected neighborhoods to help the community heal together and build back stronger.

Now, with a renewed communal push around Parshat Chayei Sarah, the RZA is building on the momentum inspired by the lives of Avraham Avinu and Sarah Imeinu to propel the grassroots campaign’s funds forward by more than half, with an urgent goal of reaching $250,000 to continue funding the programs in both cities.

“Our matriarch Sarah’s conviction and the steadfastness she and Avraham demonstrated when fulfilling their own divine obligations serves to inspire us in this moment as we look to further help our brothers and sisters in Israel,” said Religious Zionists of America Executive Vice President Rabbi Ari Rockoff. “We are calling on our communities in the diaspora to contribute to this grassroots effort in order to strengthen the Jewish communities of Lod and Akko by providing them with the resources they require to successfully grow back stronger after the period of unrest they experienced earlier this year.”

Synagogues, schools, other institutions, and private donors looking to join the effort can do so at: https://rza.org/israelcommunityfund/.