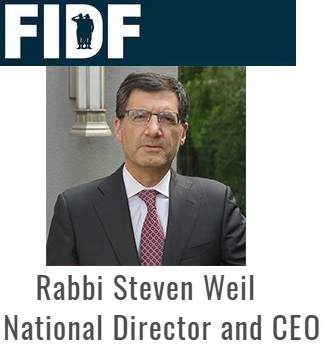 Nachum welcomed Rabbi Steven Weil, National Director and CEO of the “Friends of the Israel Defense Forces” (FIDF), to this morning’s JM in the AM to discuss his recent appointment to the position and to get an FIDF update.

The Israeli government is responsible for training IDF soldiers and providing them with the necessary tools for their service. FIDF is committed to providing these soldiers with love, support, and care to ease the burden they carry on behalf of the Jewish community worldwide.

Established in 1981 by a group of Holocaust survivors. FIDF is a 501c3 not-for-profit corporation that operates 20 regional offices in the United States with headquarters in New York City.