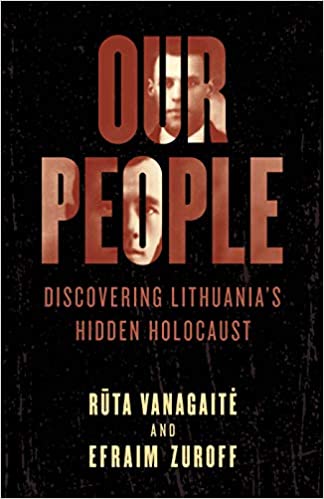 Nachum welcomed Dr. Efraim Zuroff to this morning’s JM in the AM to discuss his remarkable new book, “Our People: Discovering Lithuania’s Hidden Holocaust.”

A famous Nazi hunter and a descendent of Nazi collaborators team up on a journey to uncover Lithuania’s Holocaust secrets.

This remarkable book traces the quest for the truth about the Holocaust in Lithuania by two ostensible enemies: Rūta a descendant of the perpetrators, Efraim a descendant of the victims. Rūta Vanagaitė, a successful Lithuanian writer, was motivated by her recent discoveries that some of her relatives had played a role in the mass murder of Jews and that Lithuanian officials had tried to hide the complicity of local collaborators. Efraim Zuroff, a noted Israeli Nazi hunter, had both professional and personal motivations. He had worked for years to bring Lithuanian war criminals to justice and to compel local authorities to tell the truth about the Holocaust in their country. The facts that his maternal grandparents were born in Lithuania and that he was named for a great-uncle who was murdered with his family in Vilnius with the active help of Lithuanians made his search personal as well.

Our People exposes the significant role in implementing the Final Solution played by local political leaders and the prewar Lithuanian administration that remained in place during the Nazi occupation. It also tackles the sensitive issue of the motivation of thousands of ordinary Lithuanians who were complicit in the murder of their Jewish neighbors. At the heart of the book, these are the issues that Rūta and Efraim discuss, debate, and analyze as they crisscross the country to visit dozens of Holocaust mass murder sites in Lithuania and neighboring Belarus. This book follows them on their remarkable journey as they search for neglected graves, interview eyewitnesses, and uncover hints of the rich life that had existed in hundreds of Jewish communities throughout Lithuania.