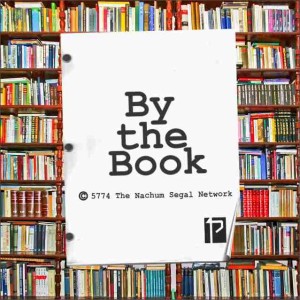 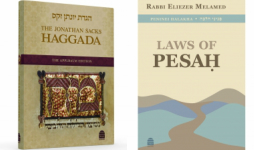 On this edition of By the Book, sponsored by Koren Publishers, Nachum Segal interviewed Lord Rabbi Jonathan Sacks about the “Jonathan Sacks Haggadah” and Rabbi Eli Fisher with Dr. Yocheved Cohen on Rabbi Eliezer Melamed’s “Laws of Pesah.”

1) Rabbi Jonathan Sacks, Chief Rabbi of the United Hebrew Congregations of the Commonwealth in the United Kingdom, offers a refreshing and insightful commentary to the Koren Haggada, together with illuminating essays on the themes and motifs of the Festival of Freedom. Sensitively translated, the traditional texts are carefully balanced alongside the Chief Rabbi’s contemporary ideas, in a modern and user-friendly design. With new interpretations and in-depth analyses of the Passover liturgy and rituals, Rabbi Sacks’ style is engaging, intelligent, at times daring in its innovation, and always inspiring. With essay titles as diverse as “Pesah, Freud, and Jewish Identity” and “Pesah and the Rebirth of Israel,” as well as explorations of the role of women in the Exodus, and the philosophy of leadership and nation-building, the Chief Rabbi’s Haggada is a thought-provoking and essential companion at the Seder table.

2) This volume on the Laws of Pesah includes a comprehensive guide to the holiday, including an examination of the concept and meaning of Pesah, the laws of preparing for Pesah, the prohibition against hametz, kashering the kitchen, a guide to seder night, and origins of the custom of kitniyot for Sephardim and Ashkenazim, and more. See the “Look Inside” tab for the Table of Contents.

Check out other By the Book archives below: